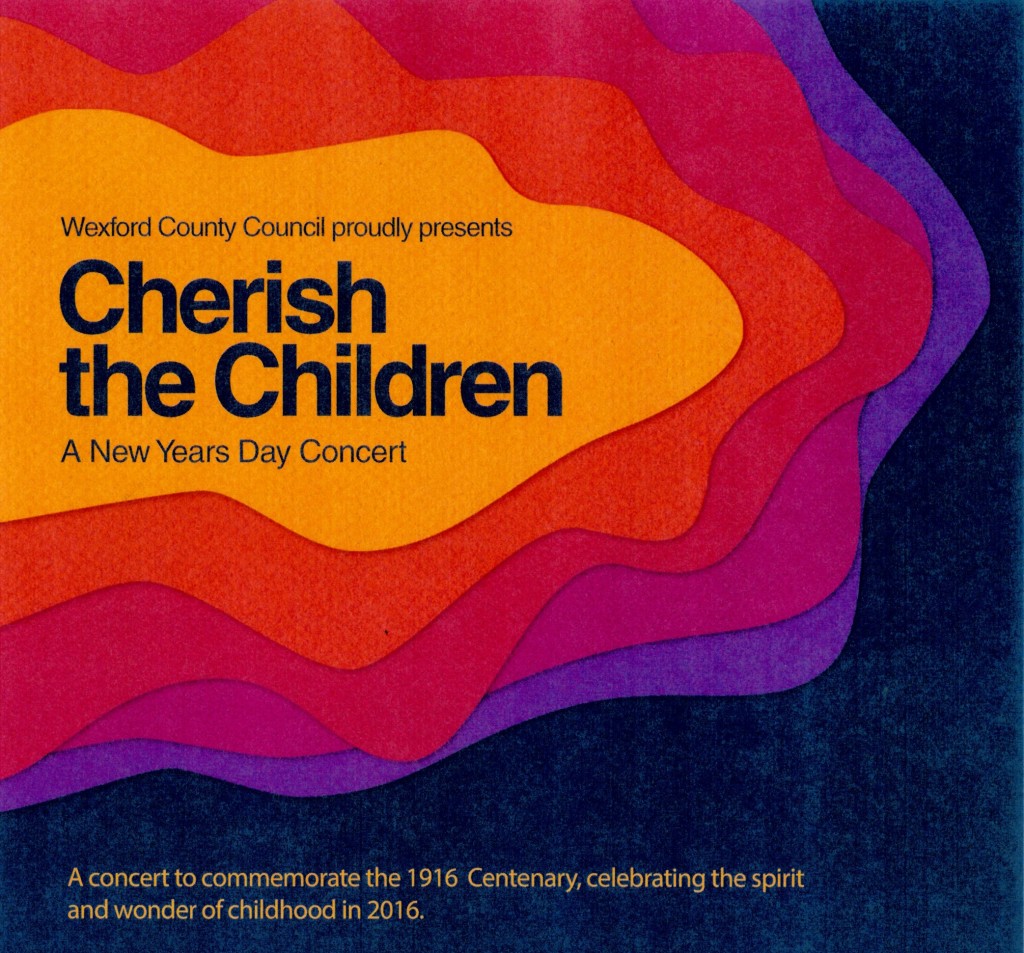 “Cherish the Children,” is a New Years Day Concert to commemorate the1916 Centenary, celebrating the spirit and wonder of childhood in 2016, with children’s choirs from across Co. Wexford and the Musici Ireland orchestra, conducted by Liam Bates.

This new work will have its debut performance at a concert in St Aidan’s Cathedral, Enniscorthy on New Year’s Day

The concert will feature the debut performance of “Child of Creation,” a specially commissioned choral piece by composer Liam Bates, commissioned by Wexford County Council to commemorate 1916.  The inspiration for the concert is derived from the passage of the 1916 Proclamation

“…cherishing all children of the nation equally.”

Children from schools in County Wexford:
Gaelscoil Charman (Wexford);
Scoil Naomh Maodhóg (Ferns);
Bunscoil Loreto (Gorey);
Presentation (Wexford);
Gorey Community School;
and County Wexford School of Music,
have been rehearsing since September and will perform on New Year’s Day.  The concert will be professionally recorded and CDs will be available for sale in early 2016.

Liam Bates has composed numerous pieces for films including Last Passenger, starring Dougray Scott, Earthbound starring Rafe Spall and David Morrissey, Ghostwood a starring Patrick Bergin and Razor Fish starring Brenda Fricker. Liam won a Liam won a PROMAX World Gold Award for Best Original Music, for the film Part of Life. He was nominated for an IFTA (Best Original Score in a Movie 2014) for the film Earthbound. In the same year he was again nominated for the prestigious World Soundtrack Award for his movie score Last Passenger. Liam is regularly engaged as an orchestrator, arranger and conductor both in the concert hall and in the recording studio and has worked withPete Townsend, Nancy Gustavson, Luciano Pavarotti, Bon Jovi, Meat Loaf, Bryan Adams, Dave Stewart and Michael Kamen.

Musici Ireland is a project based Chamber group, formed in 2012, drawing from the best professional players in Ireland, producing unusual programmes in quality performances. With a diverse repertoire, they have enjoyed sell-out concerts at the National Concert Hall, Smock Alley with composer Colm Ó Foghlú, Callery Church and earlier this year at the Music for Wexford Concert with composer Liam Bates. 2015 saw performances at the Jameson Film Festival, Ardee Baroque Festival, Kells Festival and The Performance Corporations’ Big House Festival with live broadcasts on RTÉ Lyric FM.  This versatile ensemble also collaborates with artists from different disciplines, such as composers, actors, poets, puppeteers and dancers.

It is appropriate, in this year’s focus on the 1916 Rising and foundation of the Irish State, that the first official Wexford event belongs especially to our children. As stated by composer Liam Bates:

“the concert programme honours the optimism, curiosity, playfulness, idealism, joy and creativity of our young people.”

The concert is the first event in 2016 from the County Wexford 2016 Centenary Programme which is co-ordinated by Mr. Padraig O’Gorman, District Manager, Enniscorthy, Municipal District and under the Chairmanship of Mr. Eddie Breen.