“Children of the Revolution” 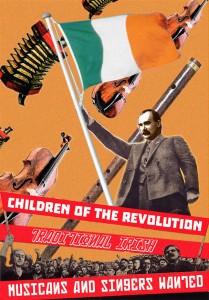 Children of the Revolution is a national research and performance project being devised and produced by Michael Fortune and Aileen Lambert with the support of The National Library of Ireland and various local authorities. This newly commissioned project will feature an ensemble of traditional musicians and singers from throughout the island, many with strong Wexford connections who are direct descendants of people involved in The 1916 Rising.

The newly formed ensemble will be brought to arrange a collection of music from their own existing repertoire as well as well researching tunes and songs from the 1916 period and perform them at series of concerts in late 2016 in venues throughout the country, including Co. Wexford.

This is one of four projects Fortune and Lambert have been commissioned to undertake throughout the county and develops from their long running traditional song project work with the NLI and ITMA. More info at www.childrenoftherevolution.ie