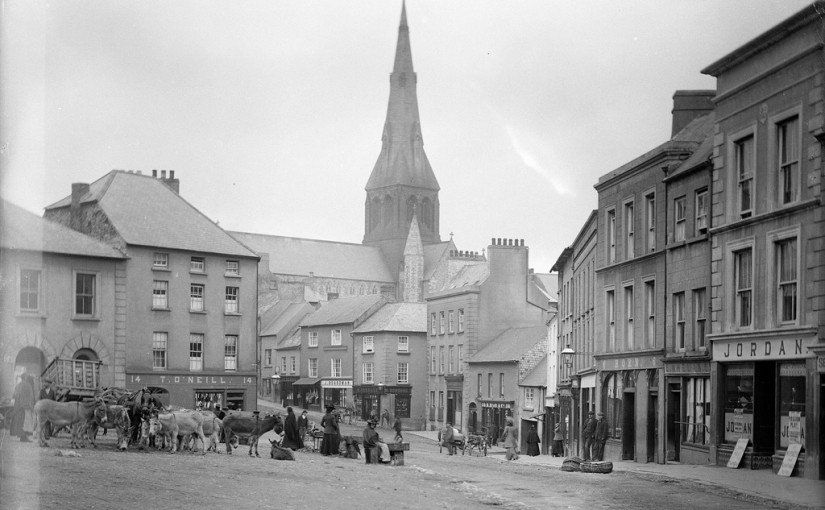 The 1916 Rising in County Wexford was the most significant event outside Dublin in terms of longevity, the numbers involved and extent of territorial control exercised. Irish Volunteer forces assumed control of Enniscorthy on the Thursday morning (27th April 1916) and before the weekend extended their influence to the entire northern half of the county. The control lasted until the following Monday (1st May) when Enniscorthy was the last area to surrender in the country.

It was little wonder then that the spirit of 1798, nurtured by folk memories and oral tradition and kept alive by the Young Irelanders and the Fenians should be re-awakened at the foot of Vinegar Hill.  The Rising in County Wexford and in Enniscorthy in particular during Easter Week 1916 was the most important contribution to the Rising outside Dublin.

On Thursday morning (27th April) some 150 Volunteers assembled outside the arms depot at Keegan’s house in Irish Street and formed under Vice-Commandant P.P. Galligan, marched up Irish Street, through the Market Square and took possession of the Athenaeum and set up headquarters there. The Proclamation of the Irish Republic was read and posted on the Market House by the Brigade Adjutant, Séamus Doyle. The Tricolour was hoisted over the Athenaeum and was saluted by a firing party under the command of Galligan.  The only tricolour flag which appears to have been flown outside Dublin was that which was hoisted over the Athenaeum in Enniscorthy.

Word came through to the Enniscorthy leaders that the Rising in Dublin was over as Pearse and the other leaders had surrendered on Saturday, 29th April. The Headquarters Staff in Enniscorthy would only give up their positions on the direct orders of Pearse.

On Sunday, 30th April, Séamus Doyle and Seán Etchingham travelled to Dublin with a British military escort to meet Pádraig Pearse in his prison cell where Pearse wrote out the order of surrender. They arrived back that evening from Dublin and the order to surrender was promulgated at midnight.

At noon, on Monday, 1st May, 2,000 English troops entered Enniscorthy.

In all 375 persons were arrested in County Wexford and the vast majority of them ended up in various jails in England. The English prison system was unable to cope with the detainees from Ireland and eventually most of the prisoners, including the Wexford men, were moved to an internment camp at Frongoch, a prison camp in north Wales within the walls of an old whiskey distillery.

The course taken by the Rising in Enniscorthy was much influenced by the leaders on both sides. Lieutenant-General G.A. French, commander of the British troops in County Wexford was an experienced officer with a distinguished record. His adroit handling of the situation was a major factor in preventing a calamitous loss of life.

The leaders of the Rising in Enniscorthy were Robert Brennan, Séamus Doyle, Séamus Rafter, Michael de Lacey, Peter P. Galligan, Richard F. King and Seán Etchingham. They were men of stature and some of them were to play leading roles in the county and country – Robert Brennan became Irish Ambassador to the United States of America, T.D. Sinnott became Wexford’s first County Manager and Micheál Kehoe, leader of the Fianna Éireann contingent, went on to serve as President of the G.A.A., and Seán Etchingham was elected a Sinn Féin T.D. in the 1918 General Election and was appointed to the Government as Secretary of Fisheries. All the Enniscorthy leaders were sentenced to death. The death sentences were later commuted.

In County Wexford, after the Rising, the swing in public opinion was clearly seen in the results of the General Election of 1918 to the Parliament in Westminster when the two Irish Parliamentary Party MPs, Peter French and Thomas Esmonde were replaced by two Sinn Féin MPs, Jim Ryan and Roger Sweetman.

The Rising of Easter Week marked a crucial turning point in Irish history. Before the Rising Home Rule had been enshrined in law but the world had changed with the Great War. The Rising and the executions of the leaders had a major impact on the public opinion and led ultimately to the victory of republican ideas and to the demand for a separate independent Irish Free State. That was the real victory won in apparent defeat by the men and women of 1916.

Wexford County Council is leading and co-ordinating the County Wexford programme for the Commemoration of the Centenary of the 1916 Rising. Our plans for the commemoration of 1916 in County Wexford follow the seven strands of the national 2016 programme as follows: Ceremonial, Historical Reflection, An Teanga Bheo the Irish Language, Youth and Imagination, Cultural Expression, Community Participation, and Global & Diaspora.

County Wexford has a proud tradition of annually commemorating the 1916 Rising with an event in Enniscorthy every Easter Monday. The Centenary Programme will be a year-long programme commencing in 2015 and continuing throughout 2016. The core programme of events is outlined in this document and will be supplemented by a range of local community-based events commemorating the centenary of the 1916 Rising throughout County Wexford in 2016. The County Wexford 1916 centenary commemorative events can be accessed on our dedicated 1916 website www.enniscorthy1916.ie.

In early 2015 we held public consultation workshops with the general public seeking their input into the range and type of projects and events that should be in our centenary commemorations. It was strongly outlined at these workshops that our programme should be solemn, inclusive, reflective and inspiring to our youth and this has become the main theme and aspiration of the County Wexford 1916 centenary commemorative programme.

The highlights of our programme include a range of ceremonial events, historical lectures, conference and literary publication on various aspects of 1916, County Wexford schools pack, County Wexford 1916 exhibition, a range of concerts, film recordings, 1916 themed song and poem compilation, the dedication of a memorial garden, restoration of The Athenaeum and of course our annual Easter Monday Celebration in Enniscorthy, which in 2016 will form part of a select national wreath laying ceremony, followed by Ireland’s largest 1916 based battle re-enactment.

The County Wexford 1916 Centenary Commemorative Programme aims to be respectful of the past and inspiring for the future. Let us proudly commemorate the 1916 Rising with the complete absence of misgivings.